Single speed (or fixie) bikes is a great way to get around for those easily flummoxed by gears and brakes and such, and the hipster backlash still loads of fun.

What Is a Single Speed Bike

A single-speed bicycle there is only one gear, these bicycles are among the most simple of bicycles because they don’t require derailleurs, shifters, double- or triple-chainring cranksets that will get you to and from class for your whole college career because there are far fewer parts to repair or replace.

What is a fixie bike

“Fixie” is short for “fixed gear”, which is a slang term for bicycles that have drivetrains with one gear that’s fixed to the rear wheel. As a general rule, fixed gear bikes are single-speed.

What is a flip-flop hub

There is a single cog on either side of the hub, contain a freewheel, meaning it allows you to coast without moving your legs. The other side is a fixed cog, the rear wheel would drive the pedals around when you stop pedaling.

Perhaps riding fixed can be something to work up to or perhaps it’s not for you at all. Feature with a flip-flop hub on your bike, you can remove the rear wheel(S-to-N), flip it around(N-to-S), and re-install it. Coasting or not, it’s entirely your choice.

Generally speaking, almost all of the single speed bicycles are equipped with the flip-flop hub.

Simply put, single speed can coast, fixie cannot. Fixie bikes without freewheel so that must continue pedaling whenever the bike’s moving, generally relying on the pedals backward pressure to control their stop.

Fixed gear not so good in rush hour traffic, but great for a closed environment, track or velodrome. For fixed gear bicycles are supposed to help people who want to develop a better pedal stroke.

Single speed bikes are excellent for city riding, not need skills, most people benefit from their ease of use.

They are great for cruising around the streets or training. It’s easy to discount the fixed gear craze as hipster drivel. These bikes fit the bill, but not flashy enough to attract thieves.

Take a closer look at the 8 Best Single Bikes the market currently has to offer. Those bikes are some of the fun and responsive bikes worth every dime. Also, you can put front and rear fenders or hanger. 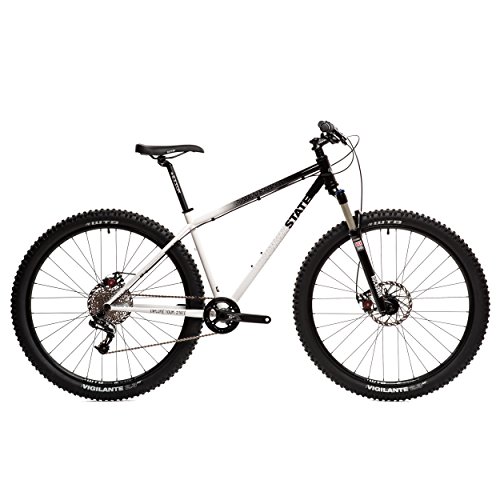 Pulsar Single Speed 29er Mountain Bike is the best single speed mountain bike available in the market right now. This bike is well equipped with all the necessary high-quality components.

First of all, this bike has an exclusive geometrical framing that is uniquely designed by the esteemed artist, Dustin Klien. The design of this mountain bike beautifully integrates graphics in the whole body frame.

There are two models of this mountain bike, one is rigid bike and the other is hardtail. The distinctive features are the availability of upgraded brakes, crank, and front suspension in the Deluxe.

Both models are single geared. For an easy conversion of to geared bike, cable guides hardware is additionally provided in the packaging.

Here is a catch, all the mighty features that this mountain bike has to offer come at an expensive price. But it surely worth the expense. As all such bikes are four-times more expensive than this one, with the same quality.

As the rush and enthusiasm of the cyclists have increased to rode the bike in such difficult terrains, so are the prices of the mountain bikes have peaked. Nevertheless, this bike still falls in affordable range. 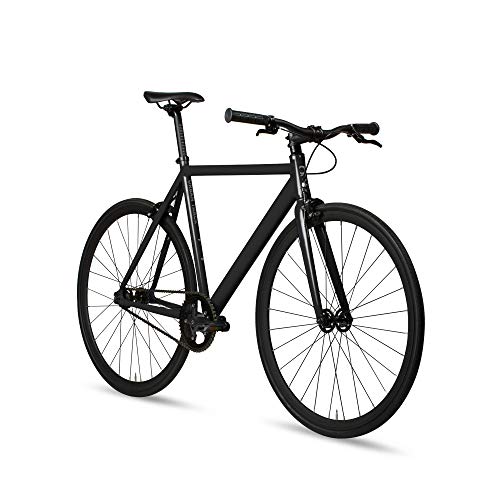 No worries if you are low on budget, and have to fix your fitness or track needs in the as low budget as possible. The 6KU Aluminum Fixed Gear Urban Track Bike is available in the best affordable price range.

You can get this bike in $250. This fixed gear track bike is affordable for all. Catering the kids, and adults single-handedly, this bike is giving a wide range of sizes to choose from.

If you are a style freak and looking to get a head turner bike, then with a wide range of sizes and colors, the Fixie is there for you! Keeping the black color in common the fixie is available in 4 different colors, all set to rock exclusively as per your personality.

This bike is extremely easy to assemble, and anyone with a little knowledge of assembly can do it perfectly. It’s rear and front brakes are easy to remove, and the ride is super smooth and swift.

The geometrical framing of this bike ensures upright and easy positioning of the rider. With such framing, this is lightweight one-speed bike that is of good quality and fulfills all the basic needs of the rider excellently. 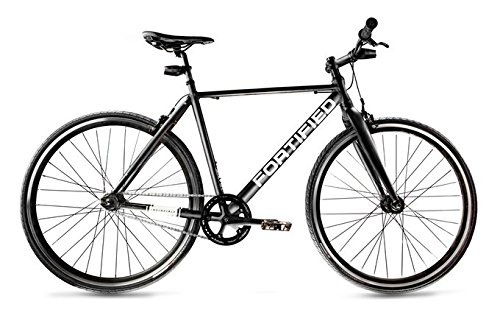 For everyone out there looking to get a high-quality bike, adorned with great features, this bike is another good option to have. The Fortified Theft-Resistant City Commuter Single Speed Bike is one of the best commuter bike available in the market.

This bike suits perfectly for an experienced commuter as well as to a newbie. This single speed hybrid bike has just been featured on top FOX, NPR, and CNBC, and has held the position of being top most talked bike for this year. Well, surely a much-deserved achievement.

With a surety of smooth, swift, and theft resistant ride on the road, this bike is a definite option to ride in the cyclocross. It has puncture resistant tires that restrain the tires from being flat.

Surely a sigh of relief for all the cross competitors. This black beauty is superbly stylish and its geometrical framing is specifically designed to cater the commuter.

Adding another great feature in the list, this bike is rust- resistant and has a body of aluminum with an extremely easy to handle the weight. It’s rust free feature is best suited for the urban style.

In my opinion, this bike is all set to give the swift ride on the city roads. 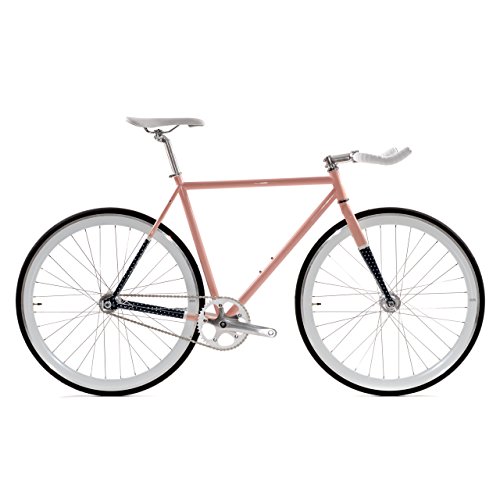 The State Bicycle Co. are famous for their exclusive range of fixed gear bikes and single speed bikes, that are immensely unique, and produce in limited quantity. These bicycles are produced in a wide range of colors. Its availability in such an amazing lost of color palette ranging from subtle to sparkling makes it easily customizable.

Talking about the strong framing, the Chromoly frame (a kind of steel) is superbly lightweight. And the framing exceeds in quality from any other highly tensile steel framing. The handlebars, Bullhorns bar are made of aluminum alloy and are wrapped up with long lasting tape.

Both front and rear brakes are available in the set and ride at a smooth pace with a front brake. Their limited production surely makes the owner a proud rider of his own, exclusive bike, truly depicting his distinctive style and aesthetic approach to colors.

Overall, this is the single most attractive, aesthetically appealing, and a high-quality bike to ride on. Such a smooth and swift ride on the road at such an affordable price surely makes it a popular pick by enthusiastic bikers. With so many great features its best single speed track bike available in the market. 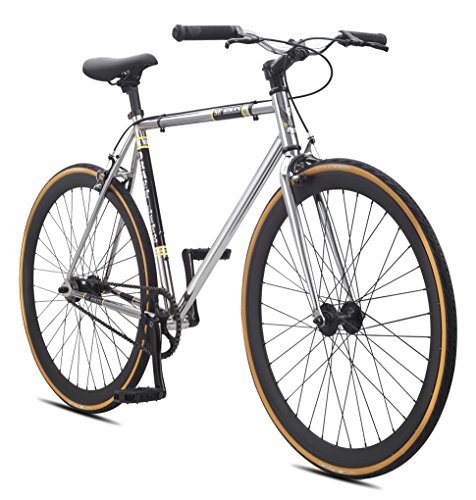 Noting that down, the SE Bikes Draft Lite Single Speed Bike is 1 speed bike that has all the great features jumbled up in one product. This bike is an urban track inspired cycle that is not only stylish but also durable, strong and lightweight.

Whether you are a city commuter, a competitor, a fitness freak, or a cyclist enthusiast, it’ll be a perfect choice for anyone. This appreciatively cool bike is particularly attractive for the young lads in their 20s.

The 28mm tyres remove some of the harshness but there’s no life in the frame. But anything bigger than pebbles your probably be hit because the bike is on-road. 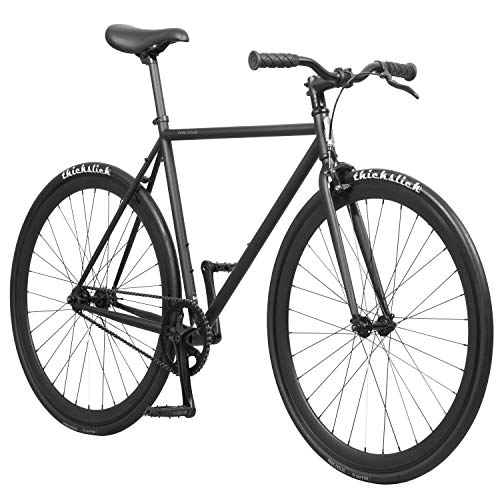 An ultimately fashionable and chic look, with a comfortable upright seating position and strong frame, this Pure Fix Original Fixed Gear Single Speed Fixie Bike is definitely a women’s choice. Fixie bike is specifically attractive for a city commuter, and every bike enthusiast who wants a combo of fashion and quality.

This bike allows an extremely easy shift from single speed to fixed gear with the availability of flip-flop back wheel. The only issue is with the seat, as the seat is quite comfortable and soft but it is not very suitable for long distance destinations.

If you’re a simple guy that wanted a simple bike for a simple transportation go to school, this urban single speed performs well on campus and around the city! 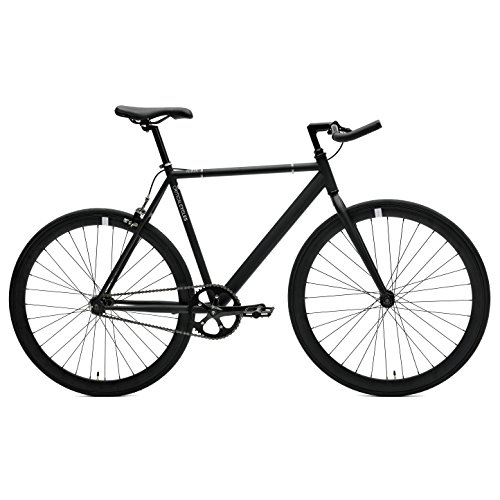 Well, one of the most affordable tracks back and fully loaded with all the must-have features, Critical Cycles Classic single gear road bike is great for all. The fixie bikes for sale cheap prices has made the lives of newbies and those who can’t afford expensive bikes.

This bike is built for track and training with 700x23c tires. Bullhorn bars not only give you room, but the horns allow you to move even further up and forward when climbing giving the rider the best possible leverage when pedaling uphill.

The whole look of this track bike is alluringly attractive. Its frame has all you need, horizontal drop outs, water bottle mounts, BMX pedals, bullhorn handlebars, and others.
It is pretty lightweight, but not that much. But it sure feels solid and quality wise great.

With an optimization of urban riding style, this single gear road bike is perfectly equipped with V rims and easy flip-flop back wheels that allows the shift from single speed into fixed gear smooth.

On the whole, this track bike is all set to charmingly makes its mark on the roads. In such a cheap price and discount, this bike is sure a must have. 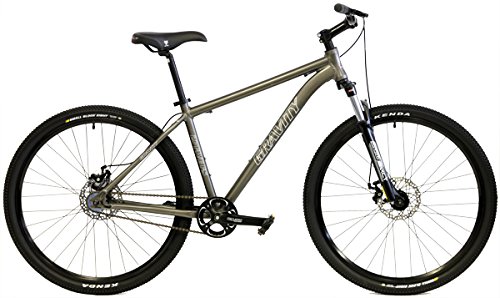 If a bike is available at an exceedingly affordable price, then it surely is a dream come true. There are a few fundamental points that must be fulfilled including smooth speed, upright positioning, comfortable seat, extremely capable brakes, power and its lightweight.

Here, Gravity 27.5 Single Speed Disc Brakes Mountain Bike has all such advantages mount up in a single bike. This is one of the best single speed mountain bikes that have highly beneficial geometrical framing. And it isn’t very heavy which makes it extremely easy to handle and operate.

If you are a big fan of 650b bikes, then this Gravity 27Five is superbly suitable for you. Comparing it with other bikes available in the market, this one has surely stood up to the mark and showed a great many features against them. One of the basic crucial thing for a biker is the effectiveness of the bike on the road.

With the availability of highly functional Disc brake, this bike has an incredible stopping power. Such brakes allow the bike rider to apply way lesser force than usual till bike comes in halt position.

This bike has kids’/women’s size range available, making it generally suitable for everyone. The front suspension fork is not that great for rocks, but with such a cheap price, this is more than enough.

On the whole, this bike delivers a baggage full of a great many features in such an affordable price.